The Australian Karate Academy teaches traditional karate, with classes for Kindy, Kids, Teens and Adults. The AKA is owned by Bob McMahon and his son Cheyne McMahon. Bob has been involved in karate since 1969, while his son since 1986.

The AKA teach Seitokukai Karate, a traditional karate style with roots in Okinawa and Japan. The AKA has also produced state, national, and international champions and graded close to 500 black belts.

Are you undecided on whether to enroll your children in a martial arts class or program? You should consider that there are many benefits that the children and in fact anyone can have from learning martial arts. Learning a martial art can provide children with some long lasting benefits that can last a lifetime.
You may be considering a traditional martial art such as Karate, Taekwondo, Jiujutsu or Judo or a you might like the idea of a more modern sport such as Mixed Martial Arts (MMA), boxing or Krav Maga but no matter which discipline or style all martial arts provide the a great platform for becoming a happier, healthier and also a fitter individual.
No matter which martial arts discipline you train in, there are many benefits to be gained from Karate classes in Salisbury especially when it comes to fitness and general health. 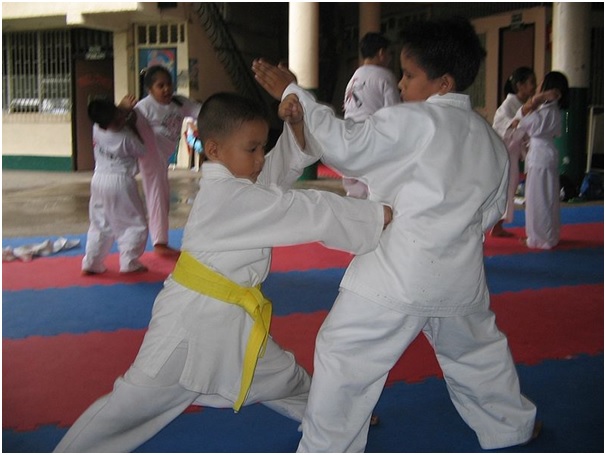 In 2017-18, the ABS (Australian Bureau of Statistics) National Health Survey found that just over two thirds (67.0%) of Australian adults were overweight or obese (this is approximately 12.5 million people), and is an increase from 63.4% in 2014-15. Additionally is it is estimated that 28% of children and adolescents in Australia are either overweight or obese.
Australians today are busier than they have ever been before just getting by. And children these days would generally rather be sitting inside playing their video games or watching TV instead of playing outside in the yard as they used to do.
Martial arts or Karate classes can help here for a few of different reasons. Firstly, martial arts classes are an intense physical exercise. During the class, the children take part in an exercise program that is a great workout and leads them to achieve better overall physical fitness.
Speed and agility are skills that many martial arts disciplines rely upon and practicing a martial art like Capoeira is a great way to do this as the movement and speed involved in Capoeira see their practitioners moving with increased speed and agility.
Quick punches, high kicks, throws, as well as acrobatic evasion are important aspects a lot martial art disciplines and in order to execute such moves a large amount of flexibility is required. Learning a martial art such as Judo, Mixed Martial Arts (MMA) or Muay Thai will lead to improvements in these areas.
Salisbury martial arts classes have a particular focus on the ability for the body to be both strong and powerful. As children learn and train in Taekwondo they develop strength so they can to execute the complex kicks and moves involved in Taekwondo. Taekwondo near Salisbury would be very beneficial to learn.
Muscular training via repetition is a foundation of many different martial arts disciplines, in particular children build strength practicing martial arts like Karate or Brazilian Jiu-Jitsu (BJJ).

Around 75% of Australians believe our society is becoming angrier and more aggressive.
Knowing that you have the ability to defend yourself, friends and your family from a stranger or a bully that is intending to harm or harass you really is an empowering feeling.
This reason alone is the number one reason why parents enroll their children in karate classes. In society today where bullying is on the increase and is evermore present in school, parks and shopping centres. Unfortunately there are many areas where are not safe for children to be alone anymore. Many parents believe that it is vital that their children given the skills, techniques and awareness to defend themselves.
Children that stick with their martial arts classes develop self-defence and awareness skills that can help them to protect themselves should the need to do so ever arise. These are skills that can remain with them throughout their lives.
As parents and as adults, we know that unfortunately it can be hazardous to even walk through a parking lot at night when leaving work. Those that who are trained in martial arts are equipped with the ability to defend themselves should they need to and this is a skill that might one day literally save their lives.

The self-defence skills that are learnt by children in Salisbury martial arts schools often have another side benefit to them. This training from a martial art school in Salisbury instills them with a level of confidence that other hobbies struggle to replicate and is one of the great benefits of martial arts training, the development of a solid sense of confidence.
Martial arts and its techniques require attention to detail and a level of patience as many moves in various styles take years to master. As students learn different techniques, there attain a sense of accomplishment and this also empowers them with confidence and self-esteem.
When children develop a high level of self-confidence at a young age they will often be much hesitant to take risks in life such as when it comes to making career changing decisions making business strategies later on in life. Developing high levels of self-confidence can often contribute towards the ability to attain higher levels in careers in adulthood.

Having self-control as well self-discipline is something that can be a struggle for everyone from time to time. Those children that have martial arts training throughout their childhood often develop higher levels of self-discipline and self-control as well. As well as creating great lifestyle habits this can help children to win the day-to-day struggles faced throughout adulthood.

There are quite a number benefits to allowing children to take part in martial arts classes. Should you still have uncertainties about whether Salisbury martial arts are a good fit for your family and your children, please reach out to a local martial arts school and speak with an instructor there. Make some enquires and gather more information.
Remember that skills that your children will learn on inside of their dojo will provide them with valuable life skills that will enable them attain a whole new level of success in their adult lives.
If you speak with any real martial artist out there and ask them, they will tell you that their greatest lessons learnt in their lives are the lessons that they learnt over the course of their martial arts training. It teaches so much about life and about how things work, it really is no wonder that so many people gain direction and a sense of purpose through their training.