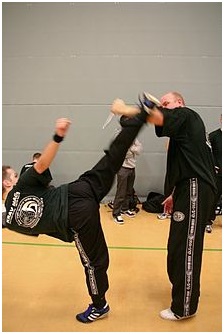 What Is Krav Maga?

If you’re wondering, What Is Krav Maga? It’s a mixed martial art geared towards self-defense. This system is easy to learn, competitive-free, and designed for everyday use. Anyone can learn to defend themselves. Here’s a quick overview of the system. You can learn it in as little as a couple of hours. And once you’ve learned the basics, you’ll be ready to protect yourself in a pinch.

Krav Maga is a mixed-martial art geared towards self-defence

If you’re looking for a martial art that combines submission techniques, close contact grappling and a sense of community, consider joining a Krav Maga class. Unlike other martial arts, Krav Maga classes emphasize a safe, non-violent way to deal with an attacker. Regardless of your level of experience, you’re bound to learn something useful.

The basic principles of Krav Maga are simple: avoid physical confrontation, disable your opponent quickly, and get out of harm’s way. It’s best for people who want to protect themselves from dangerous situations in public, and there are no rules to this style. Although it’s not recommended for a professional MMA tournament, it’s an excellent choice for street protection.

Although Krav Maga was originally developed for street use, it has since evolved into a highly effective self-defence system. Just like many Martial Arts systems, Krav Maga began as a form for combat and evolved into an art. Today, it’s actively used by military forces all over the world. It’s particularly effective for close quarter encounters.

Many people question the effectiveness of Krav Maga as a self-defence system. However, it has been deemed safe for many people because of its versatility. You’ll learn how to fight against a variety of weapons, assailants, and even other situations. The training is safe for women, as it is geared towards self-defence.

Originally developed in Israel, Krav Maga is a reality-based combative system. The name Krav Maga means “combat with contact”. Developed by Imi Lichtenfeld in the 1930s, the system has many different forms and interpretations. The Israeli army, Mossad, and Shin Bet have all studied Krav Maga for their own self-defence. It is also perfect for sports fighting, and Israeli women are particularly well-known for their martial arts skills.

The primary difference between a martial arts competition and a Krav Maga class is the training. A martial arts competition can often appear to be highly choreographed, with all students practicing the same routines and books. Krav Maga, on the other hand, trains students to be versatile and improvise. While everyone learns how to deliver a straight punch, different counters are taught based on the attacker’s style and location. A Krav Maga practitioner will employ instinctive body movements to counter his attacker and attack in turn.

The training in Krav Maga emphasizes three main moves. These are the basics of a self-defense technique that focuses on neutralizing threats by striking and kicking. The goal is to neutralize the threat, not to win the match. The first move of Krav Maga is the “Kai,” which is a combination of three stances. The second move, “Shake,” focuses on attacking the body’s most vulnerable areas: the head, arms, and legs.

When Imi Lichtenfeld moved to Palestine in 1942, he was recognized by Israeli military leaders and became involved in training their elite fighting forces. After the state of Israel gained independence in 1948, Lichtenfeld’s techniques merged into his own style. Its unique style focuses on continuous motion to target soft tissue and pressure points. This system was created to help the defender survive in dangerous situations and to defend themselves and their community.

Since the first Krav Maga course was conducted in Israel in 1982, graduates of the program began to develop training facilities in the US. In addition to US students, additional Israeli instructors began to visit the U.S. in 1984 and 1986. As a result, police departments began to train Krav Maga students in the U.S. in 1985. Since that time, the system is taught as the primary hand-to-hand combat technique in some police departments.

It’s a system that can be learned by anyone

As with any self-defense training, it requires a certain amount of adaptation and training for beginners, and Krav Maga is no different. As a combative system, the main goal of Krav Maga training is to develop physical endurance and explosiveness. Both of these aspects are crucial to achieving the desired results in self-defense. Learning Krav Maga is an excellent way to develop these qualities.

Krav Maga was designed for those with little or no martial arts experience and is highly effective and efficient. It has students with no martial arts experience as well as those with a long history of combative training. While many students find the training challenging, they benefit from the discipline of learning martial arts. This way, they can become more prepared to face any adversity. Learning Krav Maga is also a good way to protect yourself from unwanted attention.

The techniques taught in Krav Maga are not only effective and highly efficient, but they are also friendly and effective in the real world. You don’t need to be an elite athlete to learn Krav Maga. Even if you aren’t an athlete or a professional, you can learn how to defend yourself in any situation. There is no better way to protect yourself than to become familiar with its principles and techniques.

Besides self-defense, Krav Maga will teach you to deal with a variety of situations. If you are attacked by a thief or someone armed with a knife, you can avoid this situation by practicing Krav Maga. When you train Krav Maga, you’ll become better at reading situations and improvising your strategy accordingly. You can practice these techniques whenever you want and practice them for as long as you want.

It’s a system that teaches you to deal with aggression

The roots of Krav Maga lie in the anti-Semitic riots that raged in Bratislava, Czechoslovakia, in the mid-1930s. Jewish fighters led by Lichtenfeld, a former sex offender, were called to defend their communities. However, they soon discovered that actual fighting is completely different from competition fighting, and that traditional combat styles such as wrestling and boxing would not work in street battles. With this knowledge, Lichtenfeld went on to develop the Krav Maga self-defense techniques he would use in his own self-defense.

Students of Krav Maga are trained to avoid confrontation and finish a fight quickly and effectively. In addition to training techniques that will leave you unharmed, Krav Maga also teaches students how to use normal items as weapons in threatening situations. These include weapons and blunt objects that may not be very lethal, such as chairs, tables, or even the floor. Despite its mixed martial arts roots, Krav Maga has been adapted by law enforcement agencies and intelligence organizations worldwide.

As with any other martial arts style, Krav Maga focuses on three key techniques: counterattacks, submissions, and attacks. While you’re learning how to counterattacks with these techniques, you should never confuse the training for an actual attack. You should expect your heart to pound faster than normal, you may even experience tunnel vision and hearing loss. But, no matter how much you practice, you need to be committed to the training process.

The history of Krav Maga is fascinating. The first founder of this martial art, Imi Lichtenfeld, fought in the Nazi occupied Hungary in the 1930s. He used his boxing and wrestling skills to protect the Jewish quarter. He later adapted these techniques for police and civilian uses. Later, he trained in Israel and taught the system to soldiers. Today, Krav Maga is taught in all branches of the State of Israel.

It boosts your self-confidence

Self-confidence is important in all areas of your life, from business to relationships to persuasion. People who lack confidence are less likely to achieve success or even back their own projects. Lacking confidence is a slippery slope that leads to discouragement. There are several ways to boost your self-confidence, starting with getting outside of your comfort zone, and Krav Maga can definitely get you out of your comfort zone. Below are some other ways to increase your confidence level. Try one or more of these today.

Positive thinking is essential to boosting your self-confidence. Knowing you can handle dangerous situations with your Krav Maga training will help here. A positive mindset will encourage others to be positive and believe in themselves. It also helps you avoid self-defeating thoughts. For example, if you constantly think bad about yourself, you’re creating a self-fulfilling prophecy. If you start thinking positive thoughts about yourself, you’ll have more self-confidence and be more likely to take risks. You’ll also have a better understanding of other people’s feelings, which will lead to more positive relationships.

How Else Can Krav Maga Boost Your Self Confidence?

If you’ve ever wondered how Krav Maga can boost your self confidence, you’re not alone. The training in Krav Maga includes physical conditioning. By learning to defend yourself in a combat situation, you’ll learn techniques that will save your life. These techniques are so effective that many mixed martial arts competitors train in them to help them win fights. And while they don’t have the same flashy effects, they do increase your physical strength and improve your self confidence.

One of the reasons why Krav Maga (KM) can help you build your self confidence is because it can be extremely useful in situations that would otherwise put you in danger. Not only will it give you a fighting chance, but it will also give you the self-assurance to handle a potentially dangerous situation. While you might not be faced with a life-threatening situation in real life, learning KM can help you cope with stressful situations and stay calm.

Learning how to defend yourself from an attacker is a hugely effective way to build confidence. You’ll learn a three-part system to defend yourself in any situation, including a carjacking or an attack on a loved one. The first step is to identify the danger, respond violently, and disrupt the attacker’s balance and thought process. Once you’ve dealt with the attacker, you can then safely exit the situation.